Last Friday I played for my last wedding of 2016. It was just 2 minutes’ drive from my house, at the hotel that I walk past every morning with my dogs. The staff are great, the food is great, it hands down beats many more exclusive venues I’ve played at for friendliness and attention to detail, and the ceremony was wonderful.

The bride and groom’s little boy stood still as a statue throughout the ceremony clinging onto his granddad, and looked at his mum and dad with a beautiful expression of sheer wonder.

I was home and had the harp unloaded by 2.30, and was heading up into the hills behind my house just after 3pm. It was the most glamorous I’d ever looked on a run as I realised I still had all my makeup on! (rosy cheeks down to the biting wind, no cosmetic enhancement on these)

I’ve been up a fair few hills this year, particularly while I was training for the Great Lakeland 3 Day event back in April, but I was a bit shocked to realise that this was my first time up here since last year. These hills are so nearby, almost in my back garden, and it’s not a long run from the car park to get to the trig point at Cort ma Law, one of the higher peaks in the Campsie Fells. But this is proper tough hill/fell running territory, and there is a high chance of getting lost or getting stuck in a bog. For whatever reason, I’d chosen other places to train this year.

I’m desperately unfit at the moment and I knew a good stomp would get my training kickstarted again. It was a beautiful day, clear but very cold, and truly a grand day to be out in the hills.

Once I’d staggered up the initial climb, I could soon see Ben Lomond, Tinto Hill, the Pentlands and even the new Queensferry Crossing over the Forth.

As is the custom, I started off avoiding all the bogs as much as I could. It was really hard going – although the hills look like a plateau with just an initial steep climb, it is anything but flat on the top. There wasn’t much running done really, partly due to the terrain and my lack of fitness but also because I kept stopping to take photos.

I am really bad at judging falling light in relation to the distance I can cover, and while I had an idea of the sunset time, I also knew from prior experience that if you are in one of the dips up there, it can become very dark very quickly. I had my headtorch with me and plenty of spare kit, so there was no need to worry whatsoever, but I guess the uneasiness I felt was just down to lack of familiarity and losing my confidence a little bit over the summer. I knew deep down I’d be fine, and I could manage whatever happened.

It’s strange feeling like this when you are so close to home that you can almost see your house, you’re just a few miles outside one of the biggest cities in the UK and yet here you are in remote wild hill country with just a couple of sheep for company.

I’ve headed off course up here even on a warm light summer evening, just losing concentration and thinking of other things. I was surprised that night just how disorientated I felt and how quickly. It should be easy – follow the cairns, keep Glasgow on your right on the way up and on the left on the way down. But this assumes you’re not in one of those dips and you can still see Glasgow. A compass helps of course, and I think on that occasion I used the one on my phone just to point me back in the right direction again.

One of my usual tracks to Cort ma Law was really really wet – it was incredibly slow and tough going and I doubted whether I would get to the trig point in time to get back down in the daylight. I cut across to the slightly more well-used track instead, and tripped over a couple of times along the way over the long clumpy grass. I was up here on my own, it was getting dark, it could go wrong at any time and no one would know. I made it down fine as I always do, but it did surprise me a bit that while this had all felt so normal just a few months back, now it felt alien, disconcerting and a little scary.

It’s good to be scared though – partly because it’s exciting to be scared by just the right amount when you know you can handle whatever comes, and also because it reminds you to stay focused and switched on and to understand the risks of what you’re doing in the name of Fun.

The sunset was breathtaking, and I was reminded of just how beautiful the colours can be in the low winter light. From green to gold to red and other colours besides, I felt very lucky and very special getting to enjoy this on my own. 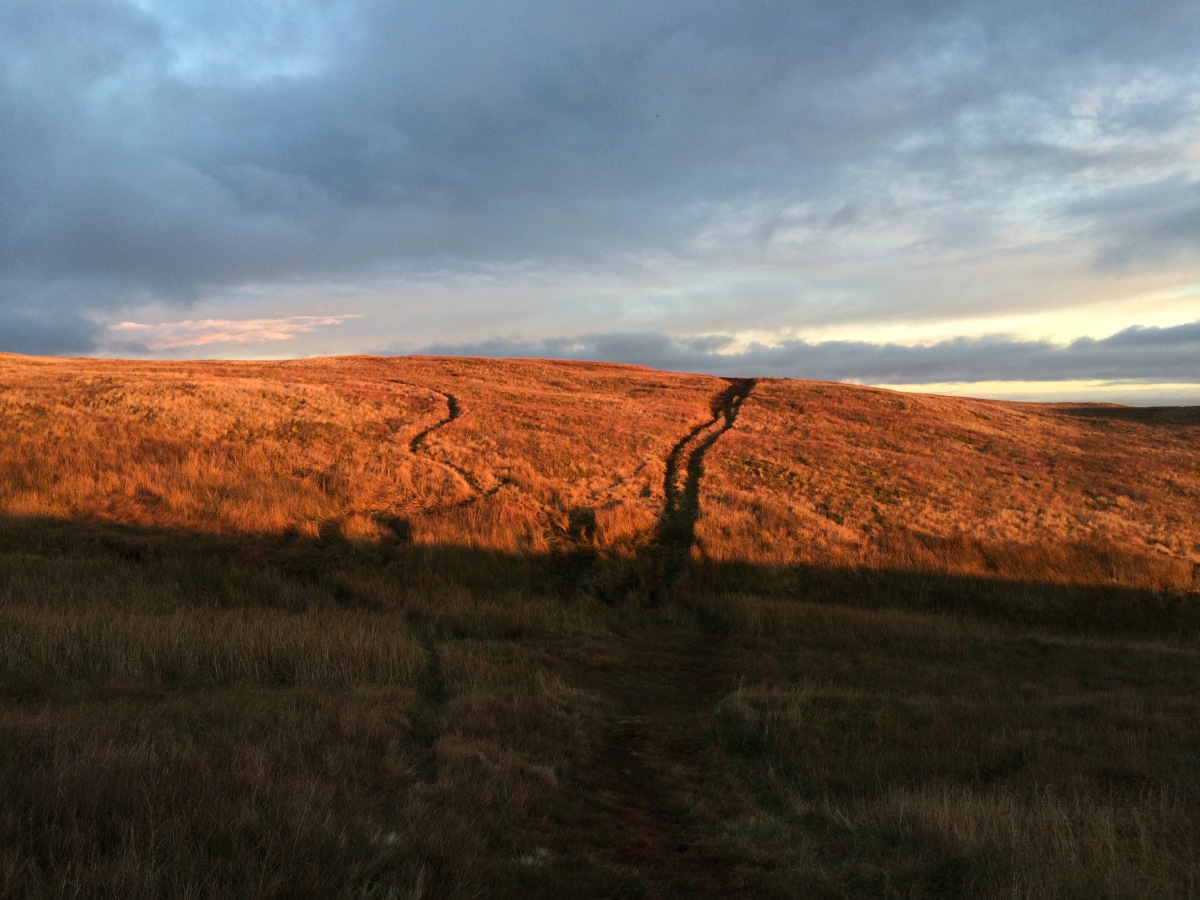 On the last bit up to Cort ma Law there are a few bigger bogs and little streams to jump across. These are quite a stretch for little legs like mine, but they are also one of the things I enjoy most about running up here. I loved the hurdles when I was at school, and there’s something about judging the distance, the impact of landing and the heart-quickening moment just after you’ve jumped when you wonder if you will actually make the other side.

On the way back, it didn’t matter about the bogs any more. My feet were soaking wet and a few more bogs wouldn’t make the blindest bit of difference. I was really quite cold by now, and very aware that I was running in just a couple of thin layers. Nothing different to what I would normally wear at this time of year, but I really noticed the feeling on the first truly bitterly cold day in a while. I was glad of my gloves and buff that day and I rarely wear those unless it is seriously cold. I could taste snow in the air – not necessarily imminent although I’m sure I felt a few raindrops that could just as easily have been snowflakes, but it was definitely on its way. 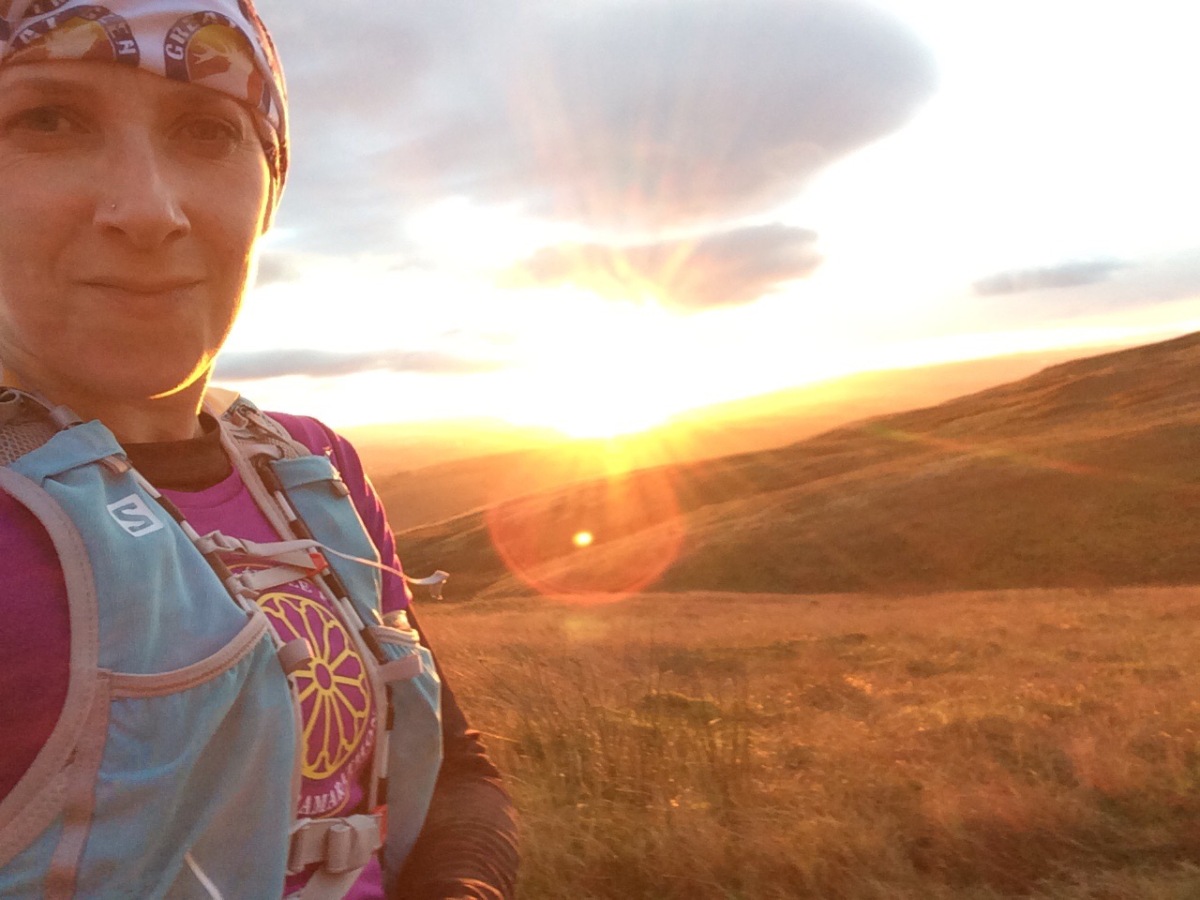 At the last cairn on the way back, I noticed a black dog ahead of me. He was making his way towards me and just for a moment I hesitated. I was attacked by a dog earlier this year and it has made me much more wary of dogs off the lead than I used to be. I needn’t have worried, this one was an absolutely gorgeous creature and he was very happy to be fussed. He was lovely and warm and very affectionate with a very thick fluffy coat, and I needed some of that heat so was in no rush to head off.

Soon his owner appeared. Here was one of those guys you see out in the hills, thin as a whippet and twice as fit with a superbly healthy glow, sparkling eyes and a big smile, impossible to age but very possibly at least 20-30 years older than they first appear.

He asked where I had been and who I ran for, suggesting one of the very serious local hill running clubs. I chuckled a little bit and said I was far too slow for them, but he was rightly having none of it – everyone is welcome there as we both knew. I mentioned I ran mostly on my own as it just seemed to work out that way, he understood and we swapped a couple of local routes we knew and had enjoyed. He also suggested a route between Cort ma Law and Meikle Bin, which I had spotted but never done. Definitely time to be ticking that off the list.

He asked if I had enjoyed my day, and I confided I was a little worried about taking my elderly greyhound to the vet later that afternoon so I had been up here clearing my head.

He put his hand gently on my arm and rubbed it a bit. I dipped my head and swallowed a few tears, grateful for Mac the dog’s comforting presence – he was now stood between my feet keeping my calves warm. We shared a few words about the worries of having older pets, and then went separately on our way, hoping we would maybe meet again up here one day. It was good to share just a little part of my run with such warm, friendly company both canine and human.